So, there I was the morning of the trek. I had my daypack packed and my other stuff stored at the hotel.  I was excited but second-guessing everything.  I second guessed what I packed, and I second guessed my choices for coming on the trip.  Everyone else showed no signs of these things.  They were excited.

We split up into two groups and got on board two rugged trucks. We did an hour on the highway before switching to a less hospitable road until we got to a checkpoint.  At the checkpoint we went to the washrooms and got our official bracelets to say we were on the tour.  Apparently, you can’t do this yourself and you need to book with a tour agency.

We stopped for lunch and to park the trucks. From this point onward, we would be on foot.  There was excitement in the air.

We set out after lunch. I had my walking poles, two water bottles strapped to the sides of my pack, and at least some determination.  The trek started out okay, except that the people coming back from the trek looked absolutely worn out and you could hear them grumbling about drinking a very cold beer.  They also reeked something terrible, but it was their hangdog faces and near physical exhaustion that struck me. 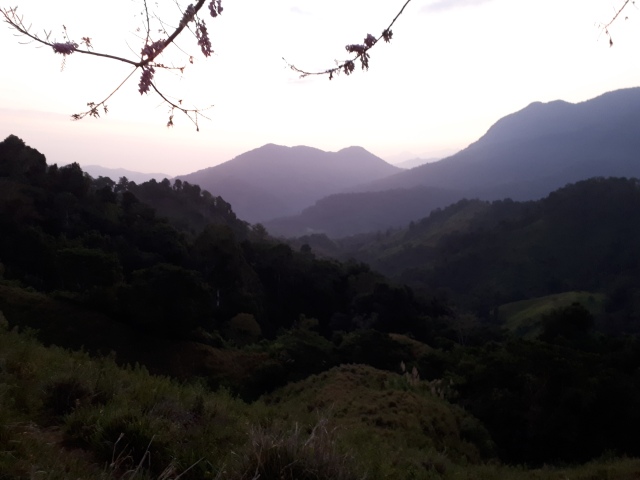 So, we walked onward and upward. The trail alternated between stones, packed dirt, and loose dirt.  None of it was easy.  In the first section we had to contend with motorbikes and mules ferrying goods and people up and down the trail.  That was quite surreal.

Most of the group seemed fitter and more determined than I.  The guide, who hung at the back with me, reminded me that this was not a race.  I tried to take solace in those words, but struggling to keep up, whether on foot or by bicycle, is never a great feeling.  It isn’t about winning or losing, but nobody feels great being the slowest.

As it turns out, some people love to race and see hiking or trekking as a competition. I didn’t see that the first day, but it became clear by the end.  There were three groups on the trip:  The competitive ones, the social and talkative ones, and the quiet one.  Yeah, I know, you probably can’t see me as a quiet one, but climbing that mountain, that is who I was.

The highlights of that first four-hour hike were of course the scenery, and the juice we had at one of the stops. It was freshly squeezed and for 2 dollars was one of the most delicious things I have ever tasted.  It was so good that I looked forward to stopping there on the return part of the trek five days later.

It was hard work and hot. I was slathered in sunblock and mosquito repellent.  If it had not been overcast, I don’t know how much worse I would have felt.  By the time we reached the camp, I was a sweat drenched mess and already tired.

Day two was much the same as day one.

The camps that we stayed at were basically solid roof structures with no walls. Their functions were to house the bunkbeds we would sleep on under mosquito nets.  They had washrooms with flush toilets, and showers–well, cold water pipes that ran upwards so you could get water splashed on you.  There were no showerheads.  I am not sure why.

The camps sold cold drinks at slightly inflated prices.  When I say that, it should be noted that a beer in the jungles of Colombia costs less than a beer at any bar in Canada.  It was never more than three dollars and since it had to trucked there by mule, I really don’t begrudge them the price.  In fact, it seemed quite reasonable.  I saved my drinking for the completion, but I did buy a few sports drinks after we finished the day’s hike.

The best thing about the tour was that we had our own chef who prepared breakfast, lunch, and dinner. This chef would prepare our breakfast, and then hike faster than us to the next camp to start preparing our lunch.  Then at night, he would prepare our dinner.  His name was Diego and he really treated us well. 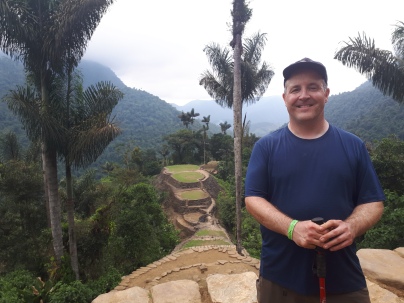 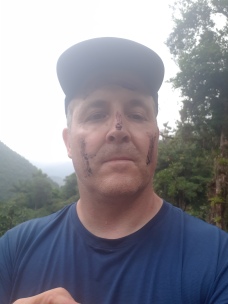 One of the group worried that this wouldn’t give us enough time at the city, but many of the others thought it was a good idea. This one group member has a “strong personality”, but we finally managed to shut her down.

The climb was rather hard. The stone steps were steep and irregular.  At least a few times, I had to grab some rocks with my bare hands to steady myself or pull myself up.

Besides our CEO, we had to guides from the Wiwa tribe–descendents of the Tayrona. They climbed up this trail with incredible ease.  I struggled.

On that third night, we arrived at the lost city. I heard other members of the group pump themselves up by saying that they “earned it” and it was so much more rewarding than taking the train to Machu Pichu.  I don’t know about all of that, but I was quite pleased with myself that I made it.  I never thought of quitting and turning back.  I never thought of paying for a ride on a mule back to the first camp.  I had wished it wasn’t hard, but other than needed to rest and do a better job of regulating my breathing, I didn’t give up.

The lost city is definitely a beautiful place. I hope my pictures can give you an idea of what I experienced.  How it was built in such a remote place is quite incredible.

The walk back was quite arduous. We had to walk the same distance we did in three days, in two.  My walking poles bent and no longer telescoped.  They were fundamentally useless and I abandoned then at an army camp.  I wanted to bring them back for a refund, but there was no way they would ever fit into my luggage again.  Making the descent without poles was quite hard and I asked the Wiwa guide to machete me off a walking stick, which he did.  It made the last day all the better. 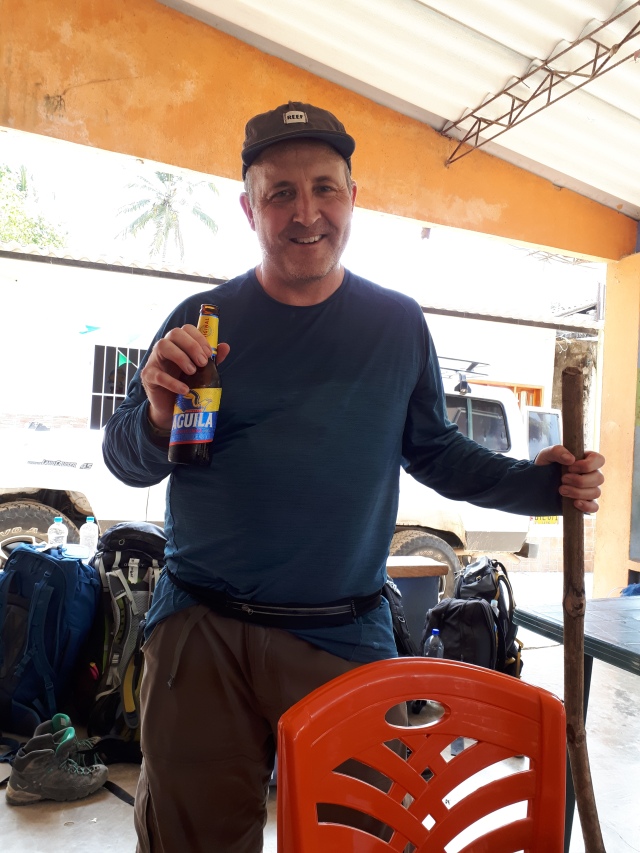 The last day was hot and we had to walk from camp two to the start in one go. Of course we stopped for a snack, but lunch was waiting at start finish line.  Arriving there felt like finishing a marathon.  I was sore.  One foot had blisters and sore nails.  My knees were good, but my muscles were tightening up.  And yes, that victory beer tasted pretty good.

On the whole, the trek part of the trip was much better organized and executed than the first part.  I will document this and give a summation in my next blog.

I am: equal parts rebel, romantic and shockingly average Joe. a writer trapped inside of an ESL teacher's body. an introverted attention seeker. a teacher who hopes one day to be called "Captain, my Captain." an intellectual who can do some very dumb things. a person whose Japan experience, despite being so long ago, still exerts a strong influence upon him. a lover of books, music, beer, hockey and Pizza.
View all posts by Anthony →
This entry was posted in accomodations, achievement, Colombia, comfort food, equipment, fitness, food, G Adventures, hiking, overcome, perfect moment, requirements, travel, travel writing and tagged beer, ciudad perida, Colombia, day pack, G Adventures, hiking, lost city, lost city trek, overcoming, stairs, steps, stone, struggle, trekking, walking poles. Bookmark the permalink.