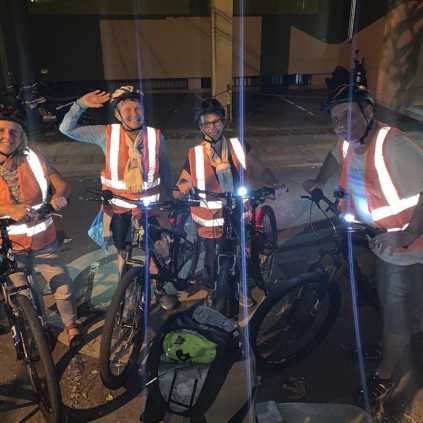 We arrived in Medellin around six, maybe earlier.   The flight was quite nice. I forget how much of a novelty it is to board and deplane on the tarmac.  The view of the country was beautiful.

Since we were trying to make up time we lost, they sent us on the bike ride.  We were doing it after dark, which was a first for the company.   I  give them credit, they armed us with lights, a big bottle of water,  a scarf for the fumes, and a reflective safety vest.  I was really enjoying it, but I  wondered about the safety of the thing for others.

The beginning was a bit scary,  but eventually we found our way to the bike paths, which are quite developed and set apart from traffic.  We covered quite a distance, which I captured a bit of on my action camera.  I also started Strava, but forgot to turn off when we were done, so I deleted it.

We saw many interesting buildings and learned about some of the great initiatives being taken to improve Medellin for everyone.

For dinner, after the ride, we had a curious mix of fruit,  granola,  and yogurt.   My stomach and other parts have still not recovered,  so I approach each meal with caution.

We finished the tour and went for drinks at a local place.  I  think the name was Taicho.  The area our hotel is in is a raucous nightclub zone, and the odd pairing of tourists with skimpily attired young women (as well as similarly dresses women approaching men on the street) indicates the world’s oldest profession is alive and well here.

I am: equal parts rebel, romantic and shockingly average Joe. a writer trapped inside of an ESL teacher's body. an introverted attention seeker. a teacher who hopes one day to be called "Captain, my Captain." an intellectual who can do some very dumb things. a person whose Japan experience, despite being so long ago, still exerts a strong influence upon him. a lover of books, music, beer, hockey and Pizza.
View all posts by Anthony →
This entry was posted in adventure, adversity, airplanes, anger, beer, beverages, bicycles, Colombia, cycling, cycling gear, disappointment, perfect moment, travel, travel writing and tagged beer, Bike path, bikes, Colombia, cycling, danger, Dangerous, Fruit salad, Granola, Medellin, park, Prostitutes. Bookmark the permalink.

2 Responses to Night Biking in Medellin.