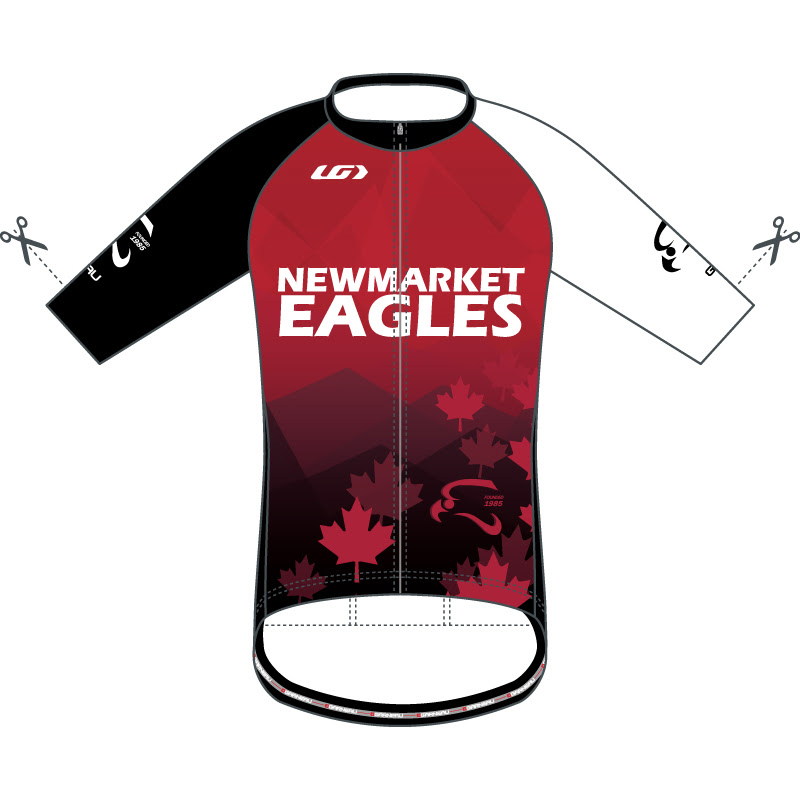 A long time ago, one of my neighbours, when talking about her husband and his hobby of running, explained that he joined a running club. She said that it was a little “unusual” because her husband was “not a joiner.”.

I am not a joiner either. I like belonging to groups, but I seem to find myself on the periphery.  I can contribute, and sometimes, I can draw in a crowd with the power of my voice. I don’t seek out the spotlight, though, and I don’t always want to follow the group..

For four years, I have belonged to the Newmarket Eagles cycling club. I go to the group rides and I keep my eyes peeled for them riding on other days.  What I don’t do is wear the club uniform.

There are reasons for this. When I first joined the club, I had already bought a pair of bib shorts from a local cycling shop and a jersey online and didn’t want to spend more.  I had also bought a bike, pedals, shoes, a helmet, and various other things.  I wanted to control my finances, but I also wasn’t much of a joiner.

In subsequent years, I really didn’t give it much thought. I was quite fine being the rider who wore black while everyone was in red and white.  I wasn’t looking at myself anyway.  I also thought the uniform looked a bit busy.

Now, in my fifth year, my feelings have possibly changed. I got an email saying that the new kit (as the clothes are referred to by cyclists) was designed and available to order.  The club had decided to go to a made on demand supplier rather than buy a bunch of kits and spend time flogging them.  As a result, they were having a fitting of the clothes on Saturday and while it wouldn’t display the colours, it would fit the same.

So, I went to fitting. It was being held a small distance north of where I live.  It wasn’t close, but not so terribly far that I felt like it was a hassle.  Besides, It was interesting to drive the roads we often cycle and realize just how far we go on some of these rides.

It was nice to see some of the club members out and I could sense the enthusiasm for the upcoming year. It seems many people have been training on Zwift and I am likely to be behind in my training for the upcoming season.  Still, it was good to talk bikes and everything that goes with it.  They even had coffee for everyone.

The only bummer was that they didn’t have the shorts in my perceived size for the try-on. They had the next bigger size.  It certainly fit, but I had nothing to compare it to.  Maybe it was too loose, but I felt like it was okay….It is when things like this happen that I get annoyed and start to change my feelings.  Now, I am back on the fence. Do I need another jersey?  Do I want to advertise for the club and its sponsors every time I go on  a ride?

I am: equal parts rebel, romantic and shockingly average Joe. a writer trapped inside of an ESL teacher's body. an introverted attention seeker. a teacher who hopes one day to be called "Captain, my Captain." an intellectual who can do some very dumb things. a person whose Japan experience, despite being so long ago, still exerts a strong influence upon him. a lover of books, music, beer, hockey and Pizza.
View all posts by Anthony →
This entry was posted in Aspirations, Reflections, Perfection, clothes, club, coffee, cycling, cycling gear, jersey, Newmarket Eagles, sw, zwift and tagged clothes, coffee, cycling, cycling club, fitting, joiner, joining, Newmarket Eagles, try on, uniform, zwift. Bookmark the permalink.

4 Responses to Joiners and Non Joiners (Catching Up Part two)