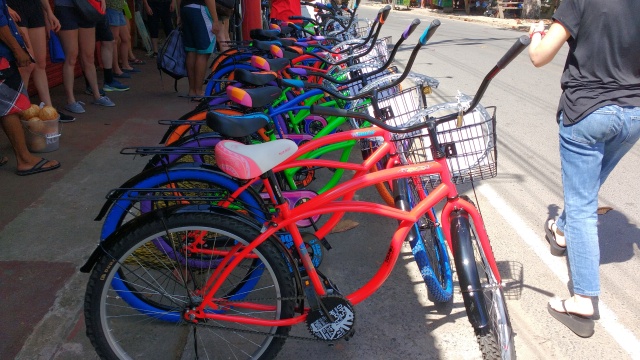 Our next day, and last full day in Puerto Viejo, was a relaxing beach day. Apparently, there was enough money in the budget to rent bikes for everyone and head to Manzanillo beach. It wasn’t a great distance away, but a fun ride on outlandishly brightly-painted fixed-gear bikes.

I enjoyed getting out on the bike again, and even had some fast downhill sections. Strava says that I got the bike up to 40 kilometres/hr.  I definitely redeemed myself from my earlier ride.

The day at the beach was good, but it isn’t really what I had in mind. I probably should have taken another surfing lesson.  However, it was nice to drink a few beers on the beach and the atmosphere was great.  I dipped in and out of the water, but I didn’t take part in the impromptu kick the soccer ball around.  That just isn’t my thing.  I am more of a Frisbee or baseball kind of guy.  I am just not a relax and do nothing person.  I guess, I should have brought a book and sat in the shade to read it.

On the way back, we had another sloth sighting. This time it was the other variety (2 or 3 toed).  That was pretty special and I can certainly understand why they are so popular.

At night we went for a pretty good meal with a very very positive restaurant owner. He was exuberant and definitely one of the happiest people I have ever met.

When leaving, I was planning on going back to the hotel although a couple of people suggested going for drinks. Instead of listening to that negative voice, I chose the other path and went out for a couple (or more) drinks.  I am glad I did, or I would definitely have missed out (FOMO)  We entered a bar that had a live fire juggling and trapeze show.  Wow!    We also did some dancing and my guide convinced two young German girls to come back to our table.  They spent time talking to the other Germans in our group and I failed to see the point.  To think I would have missed that if I had said no.  Many people in the group missed it and I think they are worse off for it. 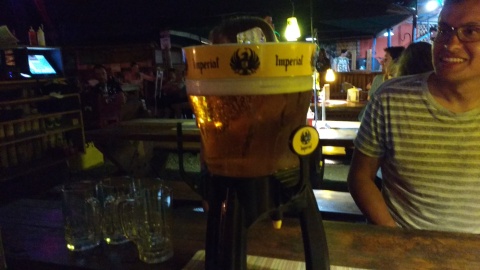 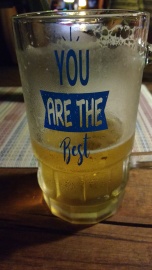 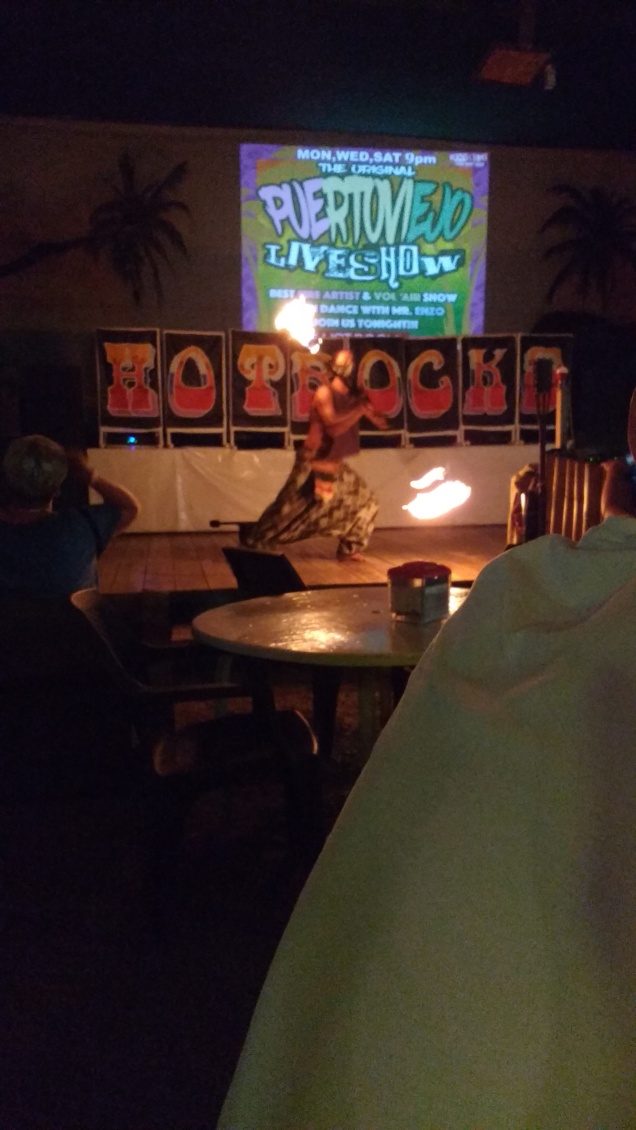 Another impressive thing that I saw was this great table top beer keg pictured above. I definitely want them to be used here.  Three litres of beer and a cooling system is a fantastic thing

I passed one of the fire dancers and they reeked of kerosene or some other fuel. No wonder they wore masks.

5 Responses to Beaches to Bars