In All Its Destructive Glory 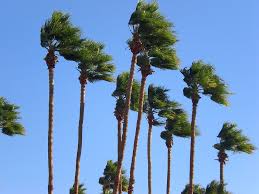 When I boarded the bus, the sun had been shining and very little seemed wrong with the world. When I exited, things were quite a bit different.

I want to blame the weather forecast, but I cannot because it was right for once. The radio announcer said that an umbrella wouldn’t help today because the wind was going to basically rip it from our grasps.  It sounded rather apocalyptic and I disregarded the warning as a matter of habit.

They weren’t wrong. At various times during the day, the wind ratcheted up its strength and hit us with strong gusts.  Walking to the subway station, I was blown off track a couple of times.  The long haired among us had their locks blowing all over the place–they could have been swimsuit models on a photo shoot.

Signs that are normally still, were rocking back and forth. Signs that poorly put up, or left on street corners with poor stands had already come crashing down.  Lots of little bits of dust and gravel were airborne.  The cranes that are part of the massive construction projects and fiascos around Yonge and Eglinton were locked in place and the operators were huddled somewhere warm–one would hope.

When I thought about writing this post, I hesitated to appoint a destructive phase of nature Today’s Perfect Moment. I certainly would never have done that for any of the earthquakes or typhoons I have been in like that.  However, the phrase, nature and all its destructive glory, permeated my imagination.  Yes, it was destructive.  Yes, it shows us that we are insignificant.  However, there is beauty in that.  We are alive at the whims of these phenomena.

As I walked home, the biting cold and bitter wind were unable to rip the rather ironic smirk from my face.

I am: equal parts rebel, romantic and shockingly average Joe. a writer trapped inside of an ESL teacher's body. an introverted attention seeker. a teacher who hopes one day to be called "Captain, my Captain." an intellectual who can do some very dumb things. a person whose Japan experience, despite being so long ago, still exerts a strong influence upon him. a lover of books, music, beer, hockey and Pizza.
View all posts by Anthony →
This entry was posted in Aspirations, Reflections, Perfection, construction, Spring, weather, wind, Yonge and Eglinton and tagged Spring, Toronto, weather, wind, windy, Yonge and Eglinton. Bookmark the permalink.

7 Responses to In All Its Destructive Glory